Whilst researching for next week's Scrum meetup in Sydney I came across interesting presentation by the Salesforce.com R&D guys as to how they transformed their internal development teams to Agile - all at one time.

Lachlan points out that the advantage of this approach is that it means there is no waterfall project running alongside the Agile ones and making them look bad (just because anything new will have its problems, and because Agile makes obvious existing dysfunctional behaviour).

(Microsoft are definitely capitalists, just look at all the caps in that title!)

I went to the second ALT.NET Sydney meeting last night and really enjoyed myself. Richard Banks from ThoughtWorks is organising the event and pizzas, saucy chicken wings, beer and caffeinated beverages were kindly provided by ThoughtWorks (which looked like it had plenty of people working back).

After Richard hit off with the news and we ate/drank we had a joint presentation by Damian McLennan (NHibernate) and Ali Shafai (ASP.NET MVC). I think the point was to show each separately and then point out how easy NHibernate made the back-end in ASP.NET MVC - but we distracted Ali and had a more interesting general discussion about MVC.

I probably got more out of the NHibernate session as that was the piece I was least familiar with. We had a few people in the audience who have "been there, done that" which was great because it gave us some very interesting discussions.

This ought to be fun! 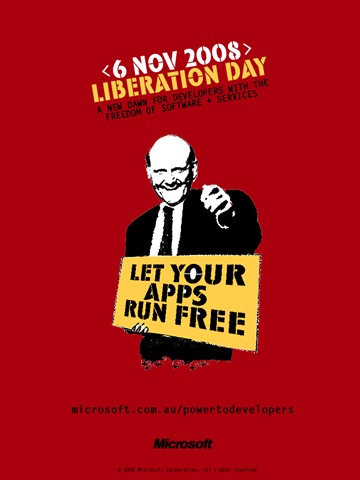 Find out more at the official site.

What do you get if you mashup Wikipedia, Google Documents, Yahoo! Pipes and Yahoo!/Google Maps?

Tony Hirst has a wonderful post on his blog showing a mashup between Wikipedia, Google Documents, Yahoo! Pipes and Yahoo!/Google maps:

"So to recap, we have scraped some data from a Wikipedia page into a Google spreadsheet using the =importHTML formula, published a handful of rows from the table as CSV, consumed the CSV in a Yahoo pipe and created a geocoded KML feed from it, and them displayed it in a Yahoo map."

I highly recommend checking it out as it gives a good overview of some of the infrastructure Yahoo! and Google are making available to all of us. Here is the end result.

It's official left-handed toons proves that listening to techno music can enhance a programmer's productivity.

I always like to program like I'm in a hacking movie racing against the evil overlord (usually with one of their project management minions hanging over me).