Recently I've implemented Getting Things Done (GTD), an easy and effective way of organising yourself from the bottom up. The central tool I am using for all of this is GMail, and I might post about how I do that in the future. But as part of doing this I knew I needed a better way of capturing ideas, notes and actions whilst I was out and about, and so I turned to using a HipsterPDA.

My first effort was a bit dismal (although functional). It was basically 10 or 12 index cards held together by a bulldog clip. It was enough to prove the concept for my satisfaction, and so I stayed up late one night scrounging bits of plastic, metal and card up and then whacking it together to form this: 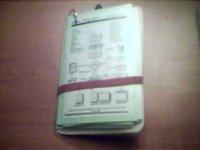 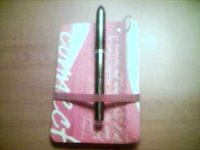 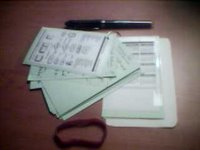 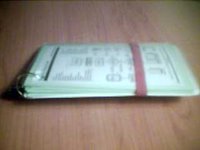 The transparent plastic on the front came from an old mouse pad that let you put pictures under a transparent screen, the flowchart is a simplified GTD reminder chart from D*I*Y Planner, and the back is decorative laminated card from the front of a notebook I am no longer using. You can just see a year's calendar stuck to one of the back index cards, that is just enough help for me to plan meetings with people, without actually requiring my full calendar in hardcopy.

Unlike my first version, this one is held together by a keyring loop that goes through holes punched in the cards and covers. I snipped off most of the loop so it is easy to slip cards on and off. This makes it a pretty standard Pierced Edition HipsterPDA.

The rubber band helps to hold it together (especially in my pocket) and also keeps the pen on the back. I've found that the key to getting the most out of GTD is to carry this with me everywhere as otherwise you end up keeping something in your head rather than out in your infallible system.

Future changes will include shifting from green cards to white ones, they still have the ruled lines running landscape (not portrait), but I can manage with that. I would like to make more use of the D*I*Y Planner's HipsterPDA templates - but I might need to wait for a index card printer first.
by Falkayn at 11:32 pm