America's ABC has an interesting article on Why We Will Never See Democracy in the Middle East. Steven Pressfield says the key is the longstanding conflict between the mindset of 'citizen' and 'tribesman'.

“What exactly is the tribal mind-set? It derives from that most ancient of social organizations, whose virtues are obedience, fidelity, warrior pride, respect for ancestors, hostility to outsiders and willingness to lay down one's life for the cause/faith/group. The tribe's ideal leader is closer to Tony Soprano than to FDR and its social mores are more like those of Geronimo's Apaches than the city council of Scarsdale or Shepherd's Bush.”

He makes a particular point about how the citizen takes part in war, but the tribesman takes revenge:

“The tribesman does not operate by a body of civil law but by a code of honor. If he receives a wrong, he does not seek redress. He wants revenge. The taking of revenge is a virtue in tribal eyes, called badal in the Pathan code of nangwali. A man who does not take revenge is not a man. Al Qaeda, Hezbollah, and the sectarian militias of Iraq are not in the war business, they are in the revenge business. The revenge-seeker cannot be negotiated with because his intent is bound up with honor. It is an absolute.”

If true, then that places the War on Terrorism not within the religious grounds of Christianity vs Islam, nor within the political arena of Democracy vs Theocracy, but on the more philosophical grounds of State vs Tribe - or from the terrorists' view, of personal revenge.

I think that there is clear example of citizens winning this war once before ... Australia's ABC aired an interesting documentary last night called Carthage: The Roman Holocaust that looked at how Carthage was copied, and eventually surpassed, by Rome. The point made was that Rome took the advanced culture, agriculture and trading routes of the Carthaginians and added an extra element - the cult of the Republic. Suddenly people who were once Roman enemies, came to see themselves as Roman citizens, and part of what their ancestors once fought. Historian Richard Miles points to the baths, the theatre and the temple as the tools Rome used to bind newly conquered peoples to the idea of citizenship. 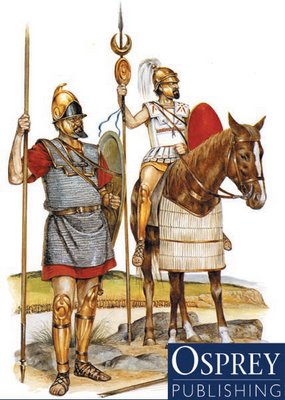 Carthaginian Veterans
Is there a lesson in this for our conflict with the tribesmen of the Middle East, or closer to home, the Solomon Islands?