bCisive gets the Minto Pyramid Principles

One of my favourite Australian software tools is bCisive by Melbourne company Austhink, led by Dr Tim Van Gelder.

They have recently announced that they have “entered into a Memorandum of Understanding to collaboratively produce a Minto software product based on the Minto Pyramid Principle® and Austhink’s bCisive product”. This is great news as it joins the easiest argument mapping tool (I know, I've tried lots of them, including Standpedia, which looks like it died at the end of 2007) with one of the pioneers of informal argument mapping in the business world.

I first came across Barbara Minto years ago when my Dad loaned me her Pyramid Principle book. I lost that first copy, but replaced it and got my own as well. It really should be mandatory reading for anyone who ever has to write a proposal or training document.

Below is a screenshot of a product strategy bMap (bCisive argument map) I prepared for our TrainingManager.NET product: 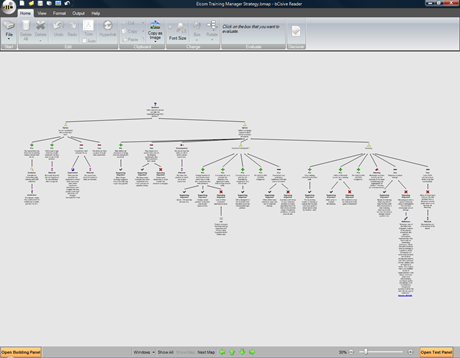 The user interface does a great job of getting out of your way, but being accessible when you need it. The two orange buttons at the bottom of the window open panels that help you create and report on the bMap you have created. The zoom slider control makes it dead easy to change perspective and the graphical navigation tools are well thought out and consistent with programs that solve similar problems.

Having just gotten used to Office 2007 I find the user interface style of bCisive to make a lot of sense to me, and it is quite easy to use. This does for argument maps what PowerPoint did for slide preparation - it takes it from the domain of experts (or highly motivated amateurs) and puts it in the hands of everyday business users.

If you want to give it a try, bCisive allow you to use a trial version for 30 days.