The End is Nigh! (of global warming alarmism)

Christopher Monckton is writing a series of articles for the UK's Daily Telegraph on climate change. His first rejects completely the Stern Report:

“Last week, Gordon Brown and his chief economist both said global warming was the worst "market failure" ever. That loaded soundbite suggests that the "climate-change" scare is less about saving the planet than, in Jacques Chirac's chilling phrase, "creating world government". This week and next, I'll reveal how politicians, scientists and bureaucrats contrived a threat of Biblical floods, droughts, plagues, and extinctions worthier of St John the Divine than of science.

Sir Nicholas Stern's report on the economics of climate change, which was published last week, says that the debate is over. It isn't. There are more greenhouse gases in the air than there were, so the world should warm a bit, but that's as far as the "consensus" goes. After the recent hysteria, you may not find the truth easy to believe. So you can find all my references and detailed calculations here.

The large, full-colour "hockey-stick" was the key graph in the UN's 2001 report, and the only one to appear six times. The Canadian Government copied it to every household. Four years passed before a leading scientific journal would publish the truth about the graph. Did the UN or the Canadian government apologise? Of course not. The UN still uses the graph in its publications. 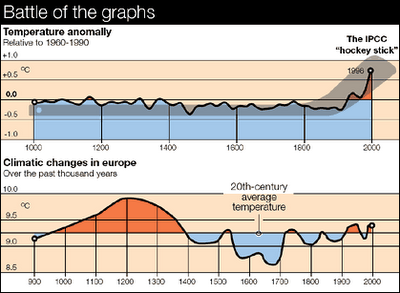 Even after the "hockey stick" graph was exposed, scientific papers apparently confirming its abolition of the medieval warm period appeared. The US Senate asked independent statisticians to investigate. They found that the graph was meretricious, and that known associates of the scientists who had compiled it had written many of the papers supporting its conclusion.”

As mentioned above, he backs his article with a comprehensive 40-page PDF document with calculations, references and discussions.

“The article is here and the background information (or at least the first part) is given here in pdf format. The backgrounder in particular is a pretty good overview of the current state of the science, such as it is, and covers the salient points from MM03, MM05GRL and MM05EE pretty well.

There are some slips of the keyboard in the backgrounder, so perhaps someone would like to e-mail Chris about them, or mention them in the comments.”

They also point out that it seems Mike Hulme, doesn't like the Stern report's alarmist language, which is strange seeing as his research centre contributed to it:

“To state that climate change will be "catastrophic" hides a cascade of value-laden assumptions which do not emerge from empirical or theoretical science.

Is any amount of climate change catastrophic? Catastrophic for whom, for where, and by when? What index is being used to measure the catastrophe?

The language of fear and terror operates as an ever-weakening vehicle for effective communication or inducement for behavioural change.”

From this blog on climate science research comes a set of interesting questions about climate science, followed by a pertinent dismissal of the UN's IPCC reports:

“These are important scientific questions which have either been poorly, or not at all, examined in climate assessments such as the IPCC and CCSP reports. Clearly, we need to move beyond such assessments that are written by individuals who are mostly evaluating their own research. Policymakers are poorly served by this inbred assessment framework by the scientific community.”

The more I read about this issue, the more it sounds like group-think taken to the extreme.
by Falkayn at 1:02 pm