Humour the secret of their success?

NEWS.com.au reports that the Australian Treasurer, Peter Costello, had a bit of fun at the expense of former Midnight Oil frontman, one-time environmental activist and now Labor MP, Peter Garrett. Costello misappropriated some classic pro-Aboriginal rights lines to chastise the Australian Labor Party (ALP) for raking in Commonwealth dollars for the rental of one of their buildings (i.e. they funded their political campaigns by renting a property to the government at a "very generous rent"). Here's the Treasurer in action: 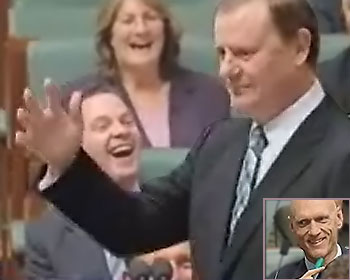 At around the same time Senator Bob Brown was attacking Peter Garrett in the senate, saying that he has sold out the environment since joining the ALP. Brown's never been one to ignore controversy, and often gets confused, but this is a classic case of poor loser syndrome, especially given Labor's pro-global warming policies. NEWS.com.au's Don Woolford put it like this:

“So the market-driven Liberals can have harmless, foolish fun and the warm and fuzzy Greens can hate. It seems upside down.”

Perhaps that's one reason why the Liberals are managing to hang on in Federal parliament.
by Falkayn at 8:53 pm