It seems my remarks about local councils seeing the light re nuclear power have been noticed on the NEI Nuclear Notes blog. Their post pointed out a long list of papers looking at the economic benefits of nuclear power stations to the local communities. 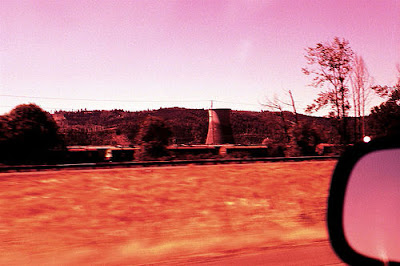 I also recently came across a documentary following on from An Inconvenient Truth, called The Nuclear Option.

“The film looks at the potential of nuclear energy to provide sustainable, non-greenhouse gas emitting energy for our society in the future. In-depth look at Fission and How Nuclear Power Works, the Three Mile Island and Davis-Besse Accidents, Nuclear Safety, Waste Transportation, Yucca Mountain, Recycling/Reprocessing Nuclear Fuel, Breeder Reactors, Sustainability, and the Potential of Fusion Energy.”

I truly believe that the time is right for the world to take a closer look at nuclear power generation. It is not an option without issues (but no mass power generating solution is) but it has a low environmental impact and in several countries, especially France, it has proven a boon to their economy.

PBS' Frontline looks at the French experience of nuclear power:

“Civaux in southwestern France is a stereotypical rural French village with a square, a church and a small school. On a typical day, Monsieur Rambault, the baker, is up before dawn turning out baguettes and croissants. Shortly after, teacher Rene Barc opens the small school. There is a blacksmith, a hairdresser, a post office, a general store and a couple of bars. But overlooking the picturesque hamlet are two giant cooling towers from a nuclear plant, still under construction, a half-mile away. When the Civaux nuclear power plant comes on line sometime in the next 12 months, France will have 56 working nuclear plants, generating 76% of her electricity.

In France, unlike in America, nuclear energy is accepted, even popular. Everybody I spoke to in Civaux loves the fact their region was chosen. The nuclear plant has brought jobs and prosperity to the area. Nobody I spoke to, nobody, expressed any fear. From the village school teacher, Rene Barc, to the patron of the Cafe de Sport bar, Valerie Turbeau, any traces of doubt they might have had have faded as they have come to know plant workers, visited the reactor site and thought about the benefits of being part of France's nuclear energy effort.”

What about nuclear waste? Let's see what the IAEA says:

For the long term, the scientific and technical communities generally agree that high-level waste and spent fuel can be disposed of safely by deep geological burial in suitable hard rock, salt or clay formations, using both natural and engineered barriers to isolate the waste. Finland, Sweden and the US have made the most progress.
...
There is also renewed interest in the possibility of international repositories, both because of limited domestic options for waste disposal and because of new proposals to strengthen the global non-proliferation regime through international control of important parts of the nuclear fuel cycle, like uranium enrichment and spent fuel management. The IAEA is actively pursuing this issue in connection with a study of possible multilateral oversight of the nuclear fuel cycle.”

Back with the naysayers, The Age claims that John Howard's pro-nuclear push in simply 'playing politics' and Rudd's geosequestration option is similarly bogus as neither would generate results in the 10-15 year timeframe that economist Nicholas Stern warned was critical to “avoid catastrophic climate change”. They do admit that nuclear is the better option:

“Compared with clean coal, nuclear power could be a better bet. The cost and risks of storing carbon are likely to be far higher than storing nuclear waste. Nuclear power plant designs could be bought off the shelf, provided a suitable regulatory regime was in place.”

Perhaps our State and Local governments could see their way clear to encouraging nuclear power for a change?
by Falkayn at 9:58 pm