We watched the ABC's Difference of Opinion tonight. As usual, the panel was pretty much close to each other in the views - although there were some noticeable areas of difference tonight. The topic tonight was the impact of Muslims on Australian society, and why opinion polls indicate a greater degree of distrust towards Muslim migrants than other groups. 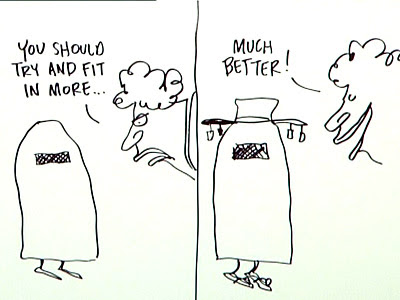 By all means follow the show link above and check out the debate, although the audience was particularly incoherent this time compared to other shows. They quickly identified the elephant in the room - that Australians in general distrust the 1.5% of us that are Muslims because of the reputation that Islam is having as a religion for violent fundamentalists.

I was particularly impressed by Dr Tanveer Ahmed (more here), who made a well-argued case that in the West the young men who gravitate to Islamist organisations are often 2nd, 3rd or 4th generation immigrants who feel alienated from both their parent's society and the one of their birth.

There is nothing new in that, but Dr Tanveer took it a step further and pointed out that engaging with young Muslims via the avenue of religion only strengthens their identity issues. He was cut off before he could elaborate further, but in the past he has warned against the raising of cultural shields by migrants, seeking to protect their children from Australian culture, whilst enjoying the economic success it brings. More interesting though, was the comments he has made about sport bringing Aussies together, especially soccer. 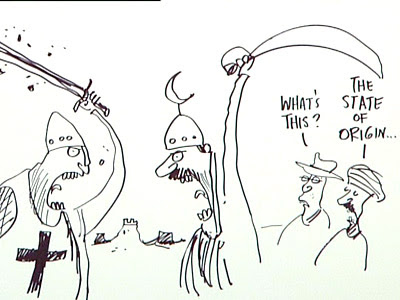 By engaging these young men as fair dinkum athletes, or potential fellow team supporters, we can seek to bridge divides and help those who might be alienated (not just the children of Muslims, but all immigrants) find a place for themselves and their culture.

“It is soccer that can cross ethnic groups and social classes, sprouting a nationalism not felt by many.

If its wave continues, it can be the symbol that reflects best Australia's multicultural success and its confident presence on the world stage across all human endeavour.

Perhaps we will even begin to call it football.”

I have lived near several Muslim communities in Sydney, and I know how hard it can be to strike up a conversation with a bloke in white robe, slippers and knitted skull-cap. He might find my suit and tie similarly confronting. However, give us a soccer ball to kick about, someone else to play against, and we can both find the other more approachable. It is a simple solution, but many good answers are. It requires dedication and the selfless involvement of volunteers willing to bridge cultural divides, and sometimes be caught between them, and it will take both Muslim and non-Muslim encouragement - but the fruit of that labour might be a much sweeter future for Australia.
by Falkayn at 11:12 pm