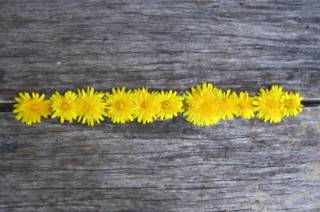 My son decided to arrange some yellow flowers today, not bad for a toddler!

The times they are a-changin'

Bob Dylan was talking about a different time than this, but it's interesting seeing parrallels. The Australian Liberal party has stormed back into power, with more seats now than before the 2004 election.

The Democrats have lost their position of 3rd place to the Greens, but they are struggling themselves in the face of their close position with Labor, and apparent extreme views (like legalising ecstasy, LSD, etc). The rather feral looking middle-aged woman handing out Greens literature at my local polling place simply hammered the point home.

It was very interesting that at least one academic has seen this election as showing younger Australians attracted towards the Coalition. I wonder if the Greens' appeal is limited to the politically correct older generation and those young people that still buy the nonsense about PC being good?

On another note, today was one of the hottest Sydney days in October ever, reaching a massive (for Spring) 38.2C. It looks to cool off over the next day or two, but perhaps global warming is here to stay? ;-)

[EDIT: It seems that young celebrities are putting their money behind Kerry in the US. Does that mean they're more sensitive to political correctness than young Aussies? Or is just that our youth are more worried about getting a mortgage, and back the Liberal's track record?]
by Falkayn at 9:50 pm No comments: