It seems that in recent months News.com.au has allowed its online journalists to get away with a (relatively) large number of grammatical errors. Often they are at the end of a large piece rushed out in response to breaking news, but sometimes I just wish they'd read it one more time before going live. Check out today's typo on the Superbowl results (scroe for score): 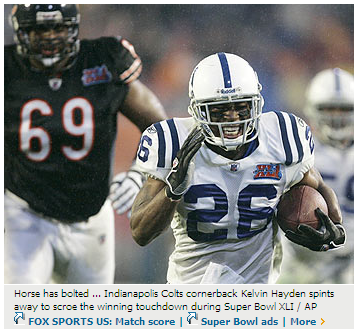 However their greatest crime is when they out out a story headline on RSS without any body text. To be fair to the journalists this may be a problem with their CMS pushing out RSS feed changes at set intervals, without regard to whether an item is completed yet or not. The end result though is that the reader sees an attention grabbing headline, clicks to read the story and is presented with nothing more than a headline and a blank page.

It seems obvious to me that mainstream media such as News Corporation need to learn to play online, but they also need to maintain their existing high standards. I wonder if some of the slackness is because Rupert's so focussed on the TV and print editions that he can't keep an eye on the web editions of his newspapers? (of course that begs the question of why you would rely on one senior exec for such oversight ...)

UPDATE: The images below show the version of a story that the RSS page takes you to and the same story in full. It looks like one explanation for the difference might be that they are trying to publicise stories that they show in their entertainment area's Flash-driven story viewer. It's a pain however for RSS users who then will need to search their website for the full story.